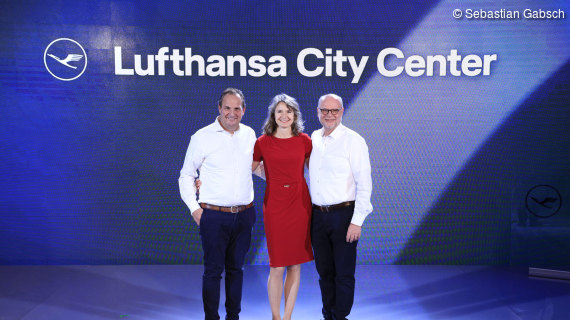 Lufthansa City Center group is advancing its international platform strategy also from the human resources aspect: Starting January 1, 2020, Martina Grönegres will become the new Managing Director of Lufthansa City Center International (LCCI). Grönegres is the successor of Uwe Müller, who took over the LCCI management in 2017 for 3 years and who will go into preretirement in January 2020.
With a degree in Economics and Chinese Studies, Martina is currently responsible for regional Sales Services as Senior Director Sales Services Home Markets and Global Accounts at the Lufthansa Group. The Manager’s 20 years of global sales experience is an important module toward the LCC target to sell business travel and tourism services as an interna-tional online platform provider.
Martina Grönegres introduced herself to the LCC partners at the annual international LCC plenum of the franchise group in Montenegro, where the platform strategy is being presented. “Currently, we are experiencing one of the most exciting periods in travel business: sales processes take place to a large extent on online platforms. At LCC we have the necessary prerequisites for customer-focused retail through our technology expertise and international presence. The business potential is great and I look forward to being part of this exciting journey”, Grönegres commented on her upcoming new role.
About Martina Grönegres:
Holding a degree in Economics, she started her career in 1983 as an Office Manager at Henkel KGaA in Düsseldorf with further stations in New York and London. After graduation, Martina Grönegres transferred to Deutsche Lufthansa AG in 1996, where she started her career in Frankfurt with a senior position in the company group strategy. Her next station was in Peking, where she managed the liaison office of the Lufthansa company group. As General Manager, Grönegres opened the Lufthansa Service Center in Shanghai in 2004. In 2008 she became the Lufthansa Sales Manager for Northern China headquartered in Pe-king. In September 2012, Grönegres transferred back to Germany Sales, assuming the sales management for Eastern Germany headquartered in Berlin. In January 2016, she addition-ally assumed the sales management for the NRW territory. Since September 2016, the Manager has been responsible for regional Sales Services as Senior Director Sales Services DACH and Global Accounts of Deutsche Lufthansa AG. Grönegres was born in Düsseldorf in 1964, is married and has two children.
About Lufthansa City Center:
Lufthansa City Center (LCC) is one of the worldwide largest independent franchise systems in the travel agency market with over 570 offices in 95 countries, 5,300 employees and a total turnover of some 5.3 billion Euros (2018 business year). LCC is active in the areas of Leisure (Tourism) and Corporate (Business Travel). The LCC-business travel division acts under the label of LCC Business Travel. For more information go to LCC.de and LCC-Businesstravel.de.
About LCC´s Distribution Technology:
With sales undergoing fundamental changes and sales processes taking place online, the Lufthansa City Center group is pursuing a platform strategy.
The latest, future-oriented LCC development for international markets outside of Germany is an online travel booking platform for travel agencies. The LCC platform Lucy, developed with several partners in the sector, is focused on cutting-edge distribution technology via NDC, consolidating content from the most diverse interfaces. Traditional GDS suppliers such as Amadeus, Sabre and Travelport are also integrated.
With Lucy international, LCC travel agencies and their customers have direct access to content of currently 20 flight, hotel and mobility providers worldwide, including eight airlines. Another advantage is that all agencies can buy travel modules from each other via a global marketplace function. The Lucy Frontend solution is based on a platform of the NDC provider Atriis Technologies Ltd and can be installed customized according to market, language, payment and fulfillment. Lufthansa City Center International offers Lucy in mobile form and as a corporate booking engine. 40 LCC agencies have started operation of Lucy since its launch in 2018.
Editorial contact