This site uses cookies. By continuing to browse this site, you are agreeing to our use of cookies.

Lufthansa City Center in your area

Map is loading... Loading agencies... Agencies in this area
message
Here you can find a Lufthansa City Center 1-5 Show all 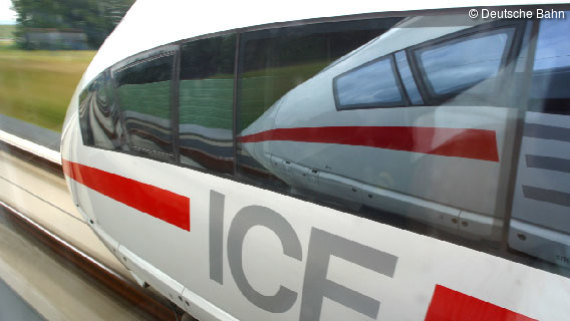 The Deutsche Bahn Group provides mobility and logistics services in over 130 countries around the world. Some 310,000 employees work to ensure their customers have access to mobility and logistics offerings, and they manage the necessary transport networks consisting of rail, overland, ocean and air links. In the passenger transport sector, Deutsche Bahn's trains and buses move over 12.5 million people every day, with upwards of 7 million people using the company's rail services within Germany on a daily basis. 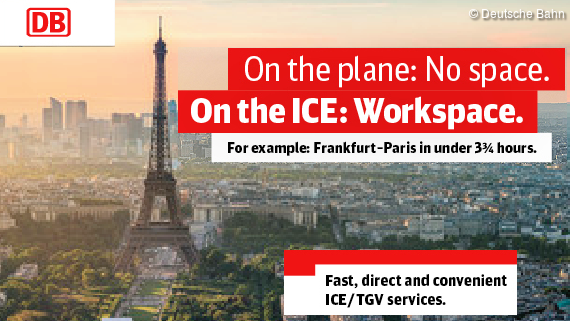 The best way to make the most of your time on a business trip is to take the train. There is no sitting in traffic jams and no waiting at the gate. Once you have boarded, you can take care of things you would not have had time for otherwise. Our ICE fleet and the trains operated by our railway partners link up towns and cities in Germany and beyond, taking you to your destination even more quickly, while you read, relax, work or prepare for your next meeting.
Another advantage is that, as well as other services to neighbouring countries, you as a business traveller also have access to free Wi-Fi on the ICE trains heading to Austria (including Railjet), Switzerland, Belgium, the Netherlands and France (including TGV). 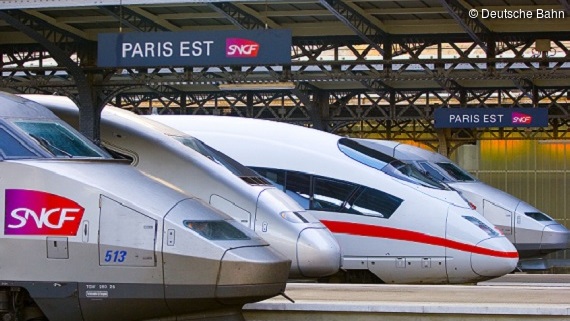 Paris: Direct to the heart of the city with the ICE or TGV INOUI

Since the new LGV Est Européenne line was opened in 2017, you can take one of several services to the French capital every day, without changing trains and unbeatably fast on the ICE or the TGV INOUI. Deutsche Bahn and France's SNCF operate their ICE 3 and TGV trains to provide five services daily (in each direction) between Stuttgart and Paris in under 3¼ hours, seven between Karlsruhe and Paris in under 2½ hours, and six between Frankfurt and Paris, either via Strasbourg twice daily in under 3¾ hours or via Saarbrücken four times daily in under 4 hours.
You have the advantage of saving considerable time, and enjoy a comfortable seat, multilingual on-board staff and high-quality catering. Furthermore, in first class you can use the free taxi booking service available from Monday to Friday. 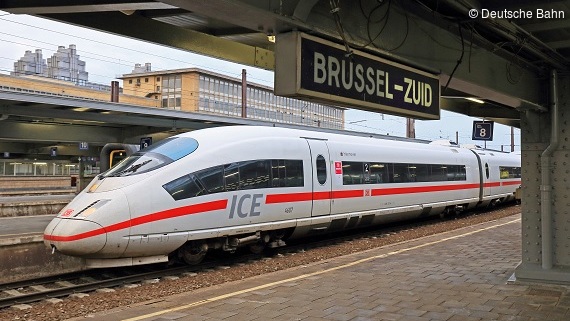 Brussels: Super fast to the capital of Europe

Gain precious working time: no matter where your meeting is taking place, with the ICE International you travel direct, fast and comfortably from city to city. The ICE takes you from Frankfurt to Brussels, via Cologne, Aachen and Liège, at speeds of up to 300 km/h in less than 3 hours, six times daily. Especially useful for business travellers is the early train, which arrives in Brussels at 9:26 am.
From 5 April 2019, the current number of services will be added to with a supplementary ICE departing from Brussels and Frankfurt respectively at around 12:30 pm. This gives you even more flexibility when planning your business trip, as the trains linking the Rhine-Main and Rhineland regions with the Belgian capital and Liège will then run every two hours. 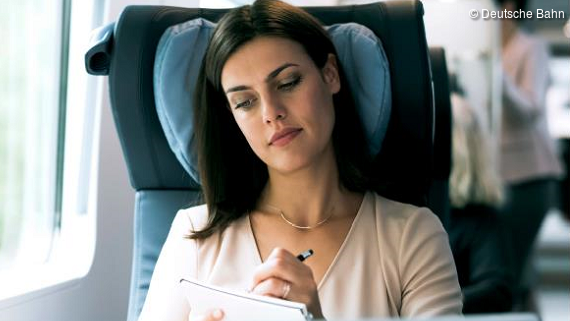 From city to city in next to no time

The Rhineland, Rhine-Main and Rhine-Neckar regions and the business city of Stuttgart also benefit from the addition of 25 new ICE 4 trains to DB's ICE fleet. Düsseldorf and Stuttgart are linked by 14 ICE services every day with a journey via Cologne, Frankfurt Airport and Mannheim that takes less than 2¾ hours.
Other popular routes for business travellers include:
Frankfurt–Berlin in under 4 hours, Frankfurt–Hanover in under 2¼ hours,
Cologne–Frankfurt in under 1¼ hours, Nuremberg–Berlin in under 3 hours,
Nuremberg–Erfurt in under 1¼ hours,Erfurt–Munich in under 2¼ hours
Leipzig–Frankfurt in under 3 hours
The added extra: All long-distance services operated by DB within Germany use 100% renewable power. The trains generate absolutely no environment-polluting CO2, in contrast to other forms of transport.